Orkin makes a compelling case for Canada’s second-smallest province, where more Gaelic is spoken than in Scotland, and where you’re as likely to spot a whale as a black bear… (Daily Telegraph)

Whale-watching from Digby Neck, sea-kayaking off Tangier and driving the Cabot Trail: three of the thrills waiting in one of Canada’s most accessible and fascinating provinces. David Orkin’s inspirational guide ranges from the capital, Halifax, to St Paul Island and the ‘Graveyard of the Gulf’ (of St Lawrence), where 350 ships have been wrecked… (Independent)

This new, thoroughly updated edition of Bradt’s Nova Scotia remains the most comprehensive guide available to this increasingly popular region of eastern Canada. Access to Nova Scotia from the USA is easier than ever. New direct (non-stop) flights operate from Boston, New York, Philadelphia, and Washington DC to Halifax International Airport.  A new ferry service connecting Portland, Maine with Yarmouth, Nova Scotia, started in 2013.  The operator and vessel changed to a CAT ferry in 2016, shortening the journey time by almost half!

Expert author David Orkin is resident in the province and his insider knowledge provides in-depth insight into the best B&Bs, wineries, beaches, remote villages, walking and cycling routes, and top spots to see moose and seals.  Also included are detailed sections on wildlife, history, culture, sights and cuisine, while interviews with locals bring the destination to life. World-class golf courses are also here, along with details of buying Nova Scotia real estate.  Even waterfront properties sell at a fraction of the price of those in, for example, New England.  For everyone from the first time visitor to the most seasoned traveler, this guide delves deeper than any other guide to reveal the best of this fascinating province both on and off the beaten track.

Salty waters pulse through Nova Scotia’s historic veins.  Virtually surrounded by the sea, the region boasts 4,600 miles of coastline.  Here fishermen have cast their nets for centuries and the abundance of contemporary seafood restaurants and historic lighthouses breathe life into their traditions.  Nova Scotia’s rich folklore is steeped in sea-related superstitions together with fables, myths, Scottish legends and ghost stories.  Traveling through rural Nova Scotia feels like going back to a time when life’s pleasures were simpler: shopping at a Farmers’ Market or a roadside fruit stall, buying lobster fresh off the boat at the wharf, or photographing the lighthouse by the old fishing village.

David Orkin is a freelance travel writer whose work has appeared regularly in leading UK publications such as The Independent and Wanderlust and Food & Travel, international publications such as Marie Claire and Condé Nast Traveller, and many travel websites.  He has traveled extensively since the mid-1970s as a backpacker, on business, and at the luxury end of the market. After over fifteen years in the travel industry in the UK, Orkin first visited Nova Scotia in 2004.  He bought a house there―and wrote the first edition of Bradt’s Nova Scotia – in 2007, and has been living there with his family (when not globetrotting) since.  He travels around the region regularly and throughout the year.  Consequently, it is relatively easy for him to stay in touch with what is going on in the province as an ‘insider’, but also for him to see Nova Scotia from the point-of-view of a visitor. 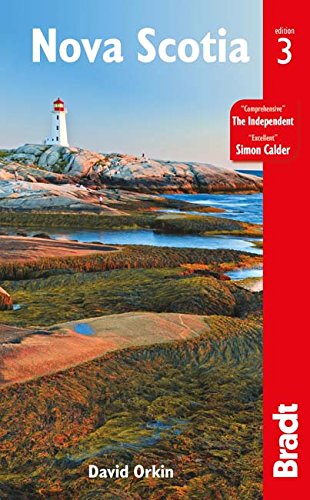 Bushcraft 101: A Field Guide to the Art of Wilderness Survival The Hidden Life ofTrees: The Illustrated Edition by Peter Wohlleben