The Peterson Field Guide Series (R) Sponsored by the National Audubon Society, the National Wildlife Federation, and the Roger Tory Peterson InstitutebrbrAmerica’s Best-Selling Field GuidesbrbrTHE PETERSON IDENTIFICATION SYSTEM Roger Tory Peterson’s unique system shows exactly what features to look for to tell one species from another.brbrEASE OF USE Peterson Field Guides are designed to work in the field, and every illustration, every word, is directed to that end.brbrTHE AUTHORS AND ILLUSTRATORS For each Field Guide, an author with expertise in the subject and an experienced artist work closely with the editors to ensure that both text and illustrations are accurate.brbrA Field Guide to Mammals of North America The most comprehensive, in-depth, and current guide to North American mammals, this book covers all the mammals found in North America north of Mexico, including those that live in near-shore waters. The only guide to include paintings and photographs of the animals as well as photographs of mammal skulls, it has 80 color plates, plus 46 additional color illustrations and black-and-white drawings, nearly 400 range maps, and more than 100 color photographs.

Fiona A. Reid has led nature tours for Questers Tours and Travel, New York, for the past decade, showing tourists the wonders of diverse lands from Indonesia to Alaska to Venezuela. An accomplished writer and artist, she has written and/or illustrated numerous field guides, including A Field Guide to the Mammals of Central America and Southeast Mexico, The Golden Guide to Bats of the World, and Mammals of the Neotropics.

RACCOONS AND RELATIVES: Procyonidae Procyonids have 5 toes on each foot, and most walk with soles flat on the ground, although the Ringtail walks on its toes. They are omnivorous, consuming large amounts of fruit when available. This family is restricted to the New World, and most species are tropical.

NORTHERN RACCOON Procyon lotor Pl. 52, Skull Pl. 7 Head and body 16–24 in. (40–60 cm); tail 6–16 in. (15–40 cm); wt. 5–33 lb. (2.3–15 kg). The familiar “masked bandit.” Black nose and mask contrasts with white sides of muzzle and white above eyes. Fur long, grizzled grayish. Tail rather short, banded cream or orange and black. Eyeshine yellowish. GEOGRAPHIC VARIATION: North: large, dark, and short-tailed. South: paler, smaller-bodied, and long-tailed. Florida Keys: smallest (wt. 5–8 lb.), very pale with an indistinct mask. Mainland Florida: small, long-legged, often orange- brown on shoulders. SIMILAR SPECIES: Ringtail and Whitenosed Coati have relatively longer tails. SOUNDS: Generally quiet. High-pitched squeals, growls, and screams in aggression or courtship. Mother trills to young. HABITS: Mainly nocturnal, but sometimes seen by day. Moves with a characteristic bouncing gait, back arched and head held low. Lopes off or retreats up a tree when caught in a light. Sleeps by day on a branch or in a tree hollow, sometimes in a burrow or building. Eats a wide variety of plant and animal food and often hunts along streams or marshes. Dabbles in water for prey and manipulates items with front paws, but does not wash food. Does not hibernate but may stay in den for several days in bad weather. Usually solitary; groups of up to 20 may share a den, and young remain with the mother for 6–9 months. Adult females stay in the same area; males travel more widely in search of mates. Breeding takes place in early spring, and 2–7 young are born April–May. Juveniles disperse in fall or stay with mother over winter. HABITAT: Varied. Most common in wetlands, damp woods, and suburban areas. RANGE: S. Canada and most of U.S., through Mexico and Central America to cen. Panama. STATUS: Abundant. Hunted in some areas for fur or sport. Can carry rabies and other parasites; raids cornfields and henhouses.

WHITE-NOSED COATI Nasua narica Pl. 52, Skull Pl. 7 Coatimundi Head and body 17–27 in. (44–68 cm); tail 16–27 in. (40–68 cm); wt. 6–14 lb. (2.7–6.5 kg). Long mobile snout; white muzzle and white spots above and below eyes. Mainly brown, shoulders grizzled with cream. Long, indistinctly banded tail often held erect. Eyeshine bluish white. SIMILAR SPECIES: Northern Raccoon has a shorter tail. Ringtail is smaller and short-nosed, with a more distinctly banded tail. SOUNDS: Short sharp barks in alarm; whines, chatters, and chirps used for group contact. HABITS: Diurnal, unlike other procyonids. Travels and feeds mainly on the ground but can climb well. Sleeps on a tree branch at night and during the heat of the day. Feeds on invertebrates in the leaf litter, small vertebrates, and fruit. Erect, slowly waving tails are often one’s first sight of a group parading through the woods. Females, subadults, and young live in stable groups of up to about 40. Males are solitary except during the breeding season (“Coatimundi” is a South American term for a lone male). Mating takes place in April, with 2–5 young born in June. HABITAT: Canyons and mountainss, mainly in oak-sycamore woods near water, sometimes in coniferous forest or desert scrub. RANGE: Se. Ariz., sw. N.M., and s. Tex. Also throughouuuuut Mexico and Central America to n. Colombia. STATUS: Threatened in Texas (Texas Parks and Wildlife), uncommon and local in Arizona and New Mexico. Common south of the U.S. border.

FISHER Martes pennanti Pl . 55, Skull Pl. 8 Head and body 17–31 in. (45–78 cm); tail 12–16 in. (31–41 cm); wt. 41/2–12 lb. (2–5.5 kg). Male is about twice as heavy as female. Large, long-bodied, and bushy-tailed. Head, neck, and shoulders grizzled yellow-brown or grayish yellow; body dark brown with long dark guard hairs; legs, feet, and tail blackish. SIMILAR SPECIES: See American Marten. Wolverine is larger with yellowish bands from shoulder to rump. SOUNDS: Usually silent; may hiss, growl, or make a low throaty call if disturbed. HABITS: Active day or night. Climbs well but usually hunts on the ground. Eats a variety of small mammals, especially Snowshoe Hares, also fruit, nuts, and fungi; is attracted to carrion. Well known as one of the few predators of adult porcupines, which it attacks on the ground, biting at the face and eventually flipping the animal to open its unarmored belly. Usually sleeps on tree branches in summer and in hollow trees or belowground in winter. Does not hibernate, but its movements are hindered by deep soft snow. Litters of 1–6 are born March–April. Breeding takes place soon after young are born; implantation of the embryo is delayed for about 11 months. HABITAT: Mature coniferous or deciduous-coniferous forest with plentiful fallen trees. RANGE: S. Canada and mts. of West. Local in New England and Mid-Atlantic States. STATUS: Range and numbers greatly reduced in 1900s by overtrapping for fur and habitat loss. Reintroduced widely, recovering in suitable habitat.

WHITE-TAILED DEER Odocoileus virginianus Pl. 41, Skull Pls. 10, 11 Key Deer Shoulder ht. 13/4–31/2 ft. (0.5–1.1 m); wt. 50–300 lb. (23–135 kg). Highly variable in size, male about 20 percent larger than female. Coat usually grayish in winter, reddish brown in summer. Belly white. Ears medium sized, about 1/3 length of head. Tail relatively long, edge of rump and underside of tail white. Metatarsal gland (on hind leg) short, less than 2 in. (3 cm) long, whitish. Antlers of male have small brow tines and one main beam, with several vertically directed points branching off the main beam. Fawn reddish brown with white spots. Spots fade after 3–4 months. GEOGRAPHIC VARIATION: Numerous subspecies occur in the U.S., the most distinctive being Key Deer, Coues’s White-tail, Carmen Mountain White-tail, and Columbian White-tail. Key Deer (Florida Keys) is very small (wt. 50–77 lb., 23–35 kg), coat reddish brown to yellow-brown. (Deer in mainland Florida are slightly larger than Key Deer but much smaller than more northerly races.) Coues’s White-tail (Arizona and w. New Mexico) and Carmen Mountain White-tail (Big Bend, Texas) are small with relatively long ears and grayish fur (gray- yellow in summer, slightly grayer in winter). Columbian White-tail (Pacific Northwest) is moderately small and dark with compact antlers. Largest subspecies are found in Canada and n. U.S. SIMILAR SPECIES: Mule Deer has longer ears and a shorter white tail tipped with black. Male Mule Deer has antlers with more than one main branch. SOUNDS: Sharply exhaled nasal snort in alarm, also foot-stamping. Buck may grunt when fighting. HABITS: Mainly nocturnal or crepuscular, but where not hunted may be seen at any time of day. Makes a bed in grass, leaves, or snow when resting. When encountered, this familiar species may snort and raise its “white flag” as it bounds off, only to drop the flag when nearly out of sight. Feeds on leaves, twigs, nuts, berries, and fungi; also grazes on grass or crops such as corn and soybeans. Usually seen in small groups of females and young or in groups of bachelor males. In winter, groups may join up in “deer yards” of up to 150. In North requires conifer stands for overwintering. Groups are not territorial but maintain a fixed home range that may be long and narrow, allowing access to a variety of habitats. During the breeding season, mature buck rubs forehead and antlers on saplings and makes scrapes that are marked with urine. These areas are visited repeatedly by bucks and does. Mating takes place in fall in North, midwinter in South. Females are mature at 1 year but usually first breed at age 2. Two-year-old females usually have a single fawn, then twins each year thereafter. For the first month of life the fawn is left in a well-concealed place when the mother forages. If disturbed, fawn remains motionless, relying on its spotted coat for camouflage. As the fawn matures it travels with the mother, using speed to avoid predators. Maximum lifespan is 20 years, but commonly less than 10 years in the wild. HABITAT: Variable; main requirements are some woodland for cover and open areas for foraging. Most abundant in low-lying, fragmented, eastern deciduous forest and in mesquite brushland or thorn scrub. Also occurs in arid areas and montane forest, where it uses riparian corridors for water and cover. RANGE: S. Canada and most of U.S. south through Mexico and Central America to n. South America. STATUS: Key Deer (O. v. clavium) and Columbian Whitetail (O. v. leucurus) are endangered (USFWS). Elsewhere generally common to abundant. This deer has benefited from human activity and is thriving in suburban and agricultural areas.

Copyright © 2006 by Fiona A. Reid. Reprinted by permission of Houghton Mifflin Company. 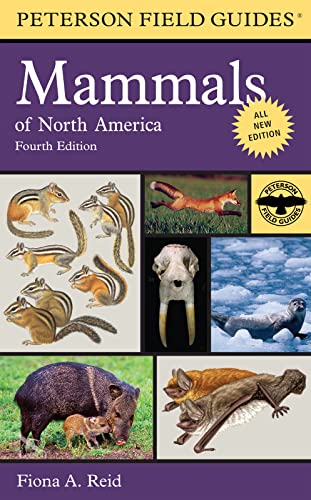 Eating Wild in Eastern Canada: A Guide to Foraging the Forests, Fields and Shorelines Be Prepared!: The Frankie MacDonald Guide to Life, the Weather, and Everything Finding the Mother Tree: Discovering the Wisdom of the Forest