Effin’ Birds is the most eagerly anticipated new volume in the grand and noble profession of nature writing and bird identification. Sitting proudly alongside Sibley, Kaufman, and Peterson, this book contains more than 150 pages crammed full of classic, monochrome plumage art paired with the delightful but dirty aphorisms (think “I’m going to need more booze to deal with this week”) that made the Effin’ Birds Twitter feed a household name. Also included in its full, Technicolor glory is John James Audubon’s most beautiful work matched with modern life advice. Including never-before-seen birds, insults, and field notes, this guide is a must-have for any effin’ fan or birder.

AARON REYNOLDS is a humourist, professional speaker, and the man behind the @EffinBirds and @swear_trek Twitter accounts. When he’s not on Twitter, you can find him producing a series of podcasts and at ComicCons dressed as George Lucas. He has been a baseball writer, a fine art printer, and a mall Santa Claus photographer. Aaron was raised in Mississauga, Canada, a suburb where they cut down all the trees and named the streets after them. He currently splits his time between Toronto and Ottawa.

Have you ever listened to the melodic chirping of birds and wondered what they were trying to communicate?

Some of the world’s most brilliant scientists have spent decades studying birdsong to gain an understanding of birds: their society, their needs, their hopes and dreams. Are birds gripped by the paralysing fear that they’ll fail to provide for their families? Do they aspire to meaningful careers? Are they frustrated at the pace of social progress in the world?

It turns out that these were the feelings of the scientists and not the birds at all. Advances in machine learning over the past ten years have allowed for detailed scenario analysis of birds and their songs, and multiple computer-driven studies* that compiled years’ worth of audio and video recordings came to an astonishing conclusion: most of the time, birds are just saying, “F**k off.”

This astonishing breakthrough has led to re-evaluations of historic recordings, including one analysis that showed US President Lyndon B. Johnson’s pet lovebirds telling British Prime Minister Harold Wilson to “f**k off and keep f**king off until your feet get wet” during a White House visit, and another in which Challenger the Bald Eagle told Major League Baseball Commissioner Bud Selig to “find a newer and more interesting way to f**k off” at the 1998 World Series. Most embarrassingly, computer analysis shows that the pigeons in the “Feed the Birds” scene of Mary Poppins are actually saying, “Just give us the f**king bread before we die of old age.”

While it would prove impossible to create a definitive listing of every way birds say f**k off, this book is an attempt to catalogue some of the most common, and to place them into broader societal context, along with identifying bird behaviours and characteristics. And while very few people will have access to the advanced computational power needed to understand birdsong precisely, the hope is that the knowledge contained in this book will allow you to look directly into a bird’s eyes and understand it when it tells you to f**k off with that s**t.

* I made these up because this book is fake—but keep that as a secret between you and me and the handful of other nerds who read footnotes. 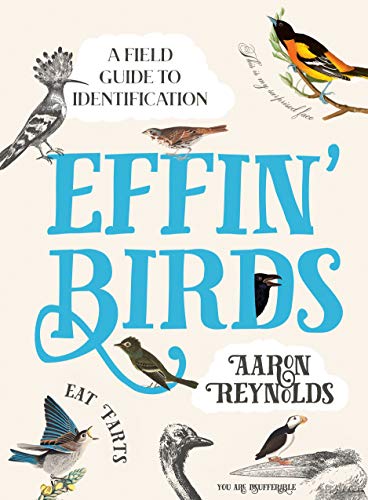 Be the first to review “Effin’ Birds: A Field Guide to Identification (Hardcover)” Cancel reply