View cart “Tote Bag – Duncan’s Cove” has been added to your cart.

(Click through to Amazon for current prices on new and used copies of the book).

Georges Island in Halifax Harbour is a prominent landmark in the heart of one of the world’s most spectacular harbours.  The history of Georges Island is a captivating story that begins when the last glaciers cut deep grooves into channels in the harbour area around a small oval drumlin.  Later, this little island became a convenient place to dry fish during the warm summer months for both the Mi’kmaq and Europeans who began to appear in the 17th century.  The little island became a vital piece of harbour defence during the founding of Halifax in 1749 and served as an Acadian prison camp after the Expulsion in 1755.

In the 19th century, Georges Island remained an important military fortification and also served as a naval hospital, quarantine station, lighthouse station, and a fascinating centre for spies and political intrigue. The island’s role in the Halifax Explosion is also explored.

In addition, the author provides an intriguing account of the island’s connection to tales of ghosts, secret passageways from the Citadel, and more recent efforts to restore the island to its former glory as the jewel in Halifax Harbour. “If you’ve not been out to Georges, this is the next best thing to being there.” -Bruce Nunn, Mr. Nova Scotian Know-It-All.

From the Inside Flap

The Famille Beausoleil Association of Broussard families in Acadiana (South Louisianna) congratulates Dianne Marshall on her book chronicling the history of Georges Island. Our organization, which represents the thousands of Broussards and Broussard relatives in this area we call ‘Acadiana’ has particular interest in the account of the imprisonment of Joseph and Alexandre dit Beausoleil Broussard in the island prison camp. Although we collected many accounts of their resistance to the British takeover, the period of their confinement has not, to our knowlege, been recorded before. We are thankful that this ‘missing episode’ has now been researched, written and published. (Don Louis Broussard, Secretary Treasurer Famille Beausoleil Association Broussard, LA USA)

Like Dickens’ wise ghost of the past, this interesting book takes the island-curious on an eye-opening historic tour through time: around Georges storied shores, through its old trenches, and inside its original lighthouse and its facilities for the military, the imprisoned, and the quarantined sick. The story – this story of Georges is indeed the story of Halifax Harbour itself, and of the founding of the garrison town on its western shore. As a fan of historical storytelling, I was pleasantly pleased that academic dustiness was left ashore as this book set sail. This island story takes us on a brisk but detailed voyage, docking at some fascinating ports in histroy. There are enough unexpected historical connections here to satisfy even someone who thought he knew it all. Who knew the dark role Georges played int he tragic Acadian expulsion?…That the island landed an expedition originally headed to support Bonnie Prince Charlie’s failed fight for the throne?…That the Plains of Abraham, the War of 1812, the American Civil War, and other great battles would all touch on this small important island? Infamous shipwrecks, ghostly haunting and 250-year Secretary-Treasurer works celebrations are all intertwined in this saga of Georges Island. Even the popular question of the legendary underwater tunnel is addressed! Haligonian history buffs will enjoy this complete history of their favourite little island. I did. It’s an easy, engaging read, strengthened by attention to factual accuracy and historical detailing. Readers will delight in this well-packaged biography of Nova Scotia’s military island. If you’ve not been out to Georges, this is the next best thing to being there.” (Bruce Nunn, a.k.a. Mr. Nova Scotia Know-it-All.)

Be the first to review “George’s Island: The Keep of Halifax Harbour” Cancel reply 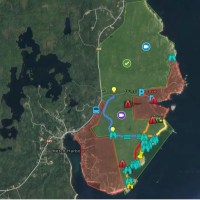